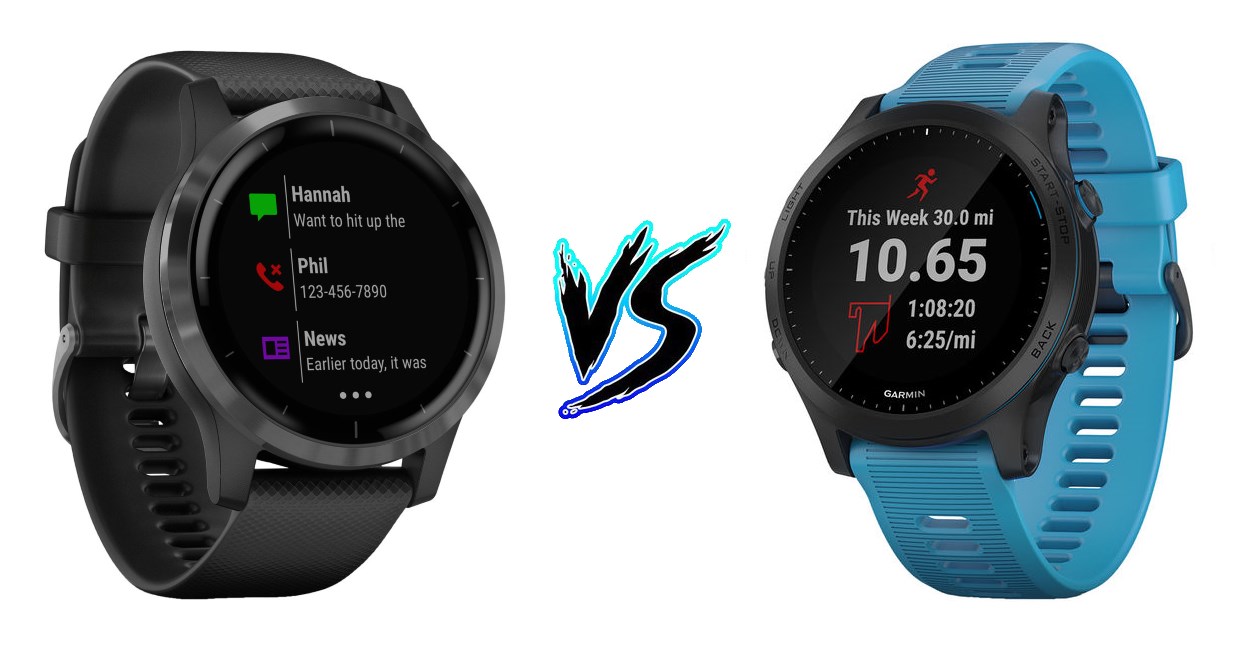 This is a simple product comparison between the Garmin Vivoactive 4 vs Garmin Forerunner 945.

They are both extremely versatile GPS watches that can track a wide range of fitness activities and sports modes. However, there are some key differences that we will make super clear in this post.

To do this, we will highlight all the the key similarities and all the key differences between the two watches. We will also provide a full list of the sports modes that each watch offers, together with some buying tips to help you make the right decision.

It’s officially time to dive in.

What are the main differences between the Vivoactive 4 and the Forerunner 945?

Reasons To Choose The Vivoactive 4

It has a touchscreen - Vivoactive 4

This is definitely one of the biggest differences between the Vivoactive 4 and the Forerunner 945. While the FR945 relies on a button interface to interact with the watch, the Vivoactive 4 relies predominantly on the touchscreen.

In some respects, this makes the Vivoactive 4 function a bit better as a standard smartwatch. If you’re used to working with a smartphone, transitioning to a touchscreen watch is pretty seamless.

However, sports enthusiasts (especially runners) are quick to point out that a button only interface is often a bit more practical when you are actively engaged in your sport of choice.

It's a lot more affordable

Naturally this could be a dealbreaker for people on a tight budget. The good news is that you can’t really go wrong if you opt for the Vivoactive 4, because it is such a well rounded sports watch. The only caveat is triathletes, who should obviously opt for the Forerunner 945, given that the Vivoactive 4 doesn’t have a triathlon mode.

The Guided Workouts are a big win for fitness enthusiasts

Garmin’s guided workouts feature is pretty cool. It literally gives you access to animated cardio, strength, yoga and pilates workouts that are preloaded onto the watch.  You can also download more workout routines from the Garmin connect app, if you need something more challenging or you grow tired of the pre-loaded routines.

I say this, because the Vivoactive 4 really does have you covered from a sports and activity tracking perspective. Fitness enthusiasts, runners, cyclists, rowers, golfers and even snowboarders will all be well served by this watch. In fact, I would go so far as to say that it’s the most well-rounded activity tracker in the world right now.

Of course the Forerunner 945 gives you all the same core features and a whole lot more (open water swimming, triathlon mode and Topo maps to name a few), but you will pay quite a bit more to access those features.

Reasons To Choose The Forerunner 945

From a sports perspective, the addition of open water swimming and a triathlon tracking make the Forerunner 945 significantly more attractive for endurance athletes.

Garmin have produced quite a few triathlon watches in their time. The Forerunner 945 quite literally sits at the top of their triathlon watch food chain. Of course it has some stiff competition from the Garmin Fenix 6, but there are several reasons which explain why the FR945 is actually better for triathletes, namely:

In other words, the Forerunner 945 is literally designed, specifically for the triathletes. If triathlons are your core focus, you can’t go wrong with this watch.

The GPS Battery Life Is Twice As Long

It's The Better Watch For Runners

There are 3 main reasons why the Forerunner 945 is the better watch for serious runners.

Now, you might not be sure what Garmin Advanced Running Dynamics is all about. The bullet points below explain the 6 main stats which the Forerunner 945 supports, but the Vivoactive 4 does not.

At this point, it needs to be mentioned that in order to unlock Garmin running power and advanced running dynamics, you need to invest in one of the following 3 accessories:

Just to be super clear, you only need 1 of these 3 accessories (rather than all 3).

Typically, Garmin’s TOPO map technology is only packed into their most expensive watches. The main benefit here is that you can access 3D topographical maps, directly on your Forerunner 945.

This is great for trail running and hiking, and it’s also very useful if you’re navigating unfamiliar streets. In a way, it’s a bit like having Garmin’s car navigation technology packed into a watch that humans can use to navigate pretty much any terrain on foot (or a bicycle).

This one is pretty simple. The Forerunner 945 can store about twice as much music as the Vivoactive 4.

Garmin ClimbPro gives you a better understanding of all the upcoming climbs along your training route (when running our cycling outdoors). It detects all the climbs, and makes all the important information available to you as you approach it. This includes:

Garmin’s PacePro technology is designed to help you achieve your target time during training and races. It’s a bit like having a pacemaker built into your watch, for the entirety of the race.

Of the extra sports modes that the Forerunner 945 has, open water swimming and triathlon are definitely the most important. But to make things super simple, it’s worth clarifying all the sports modes that are only accessible to the FR945.

When all is said in done, these simple buying tips may help you decide between these two watches.

Go for the Vivoactive 4 if: