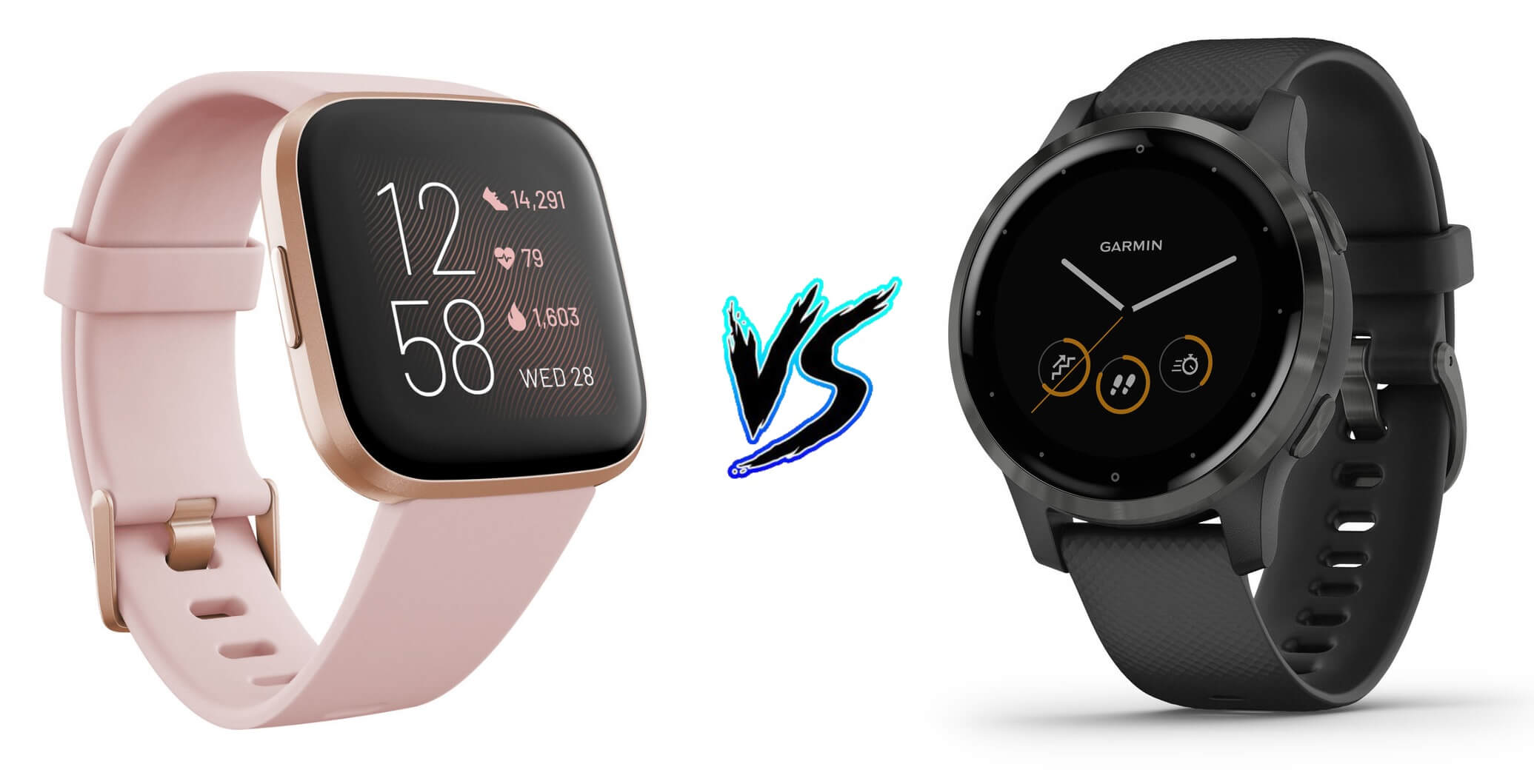 This is a quick and simple product comparison between the Garmin Vivoactive 4 vs Fitbit Versa 2. As far as activity trackers go, these are definitely two of the best available right now. But which one is better? In this post, we will unpack all the key similarities and all the key differences to help you make a decision.

But before we get into the finer details, it’s worth summarizing the main differences, from the get go.

What are the main differences between the Vivoactive 4 vs the Fitbit Versa 2?

Even though each watch has the same number of sports and activity modes in total, the Vivoactive has the better variety of sports modes, with rowing (indoor + outdoor), snowboarding, skiing, a proper golf mode, and stand-up paddle boarding being the stand-out advantages.

That being said, the Versa 2 also has a few activity modes which aren’t found in the Vivoactive 4, namely: martial arts, kick boxing, spinning, tennis and bootcamp.

The Fitbit Versa 2 comes in 6 color options , whereas the Vivoactive 4 only has 3 color options available (at this moment in time).

The screen upgrade is probably the biggest difference between the original Fitbit Versa and the Fitbit Versa 2.

Long story short, the AMOLED screen of the Versa 2 produces a rich color experience, and the screen resolution is also very high. This is not to say there’s anything wrong with the screen of the Vivoactive 4. The Versa 2’s AMOLED equivalent is just a bit better.

The Fitbit App Is Better at Keeping You Motivated

If you’re looking for an activity tracker that will keep you motivated and excited about your fitness progress, you really can’t go wrong with Fitbit’s ecosystem.

The Fitbit app is super user friendly, and it can become a key companion on your fitness journey if you embrace all the features that the app has to offer. Ultimately, if you do most of your training at the gym, and you want an activity tracker that can help you achieve your weigh loss goals, the Fitbit Versa 2 could be a very good fit for your needs.

The Fitbit Versa 2 Is A Lot Cheaper

I’m actually somewhat surprised that more brands haven’t jumped onto this bandwagon. Even though the Garmin Vivoactive 4 also has advanced sleep tracking functionality, it doesn’t compile all this information into a super simple metric called sleep score. Fortunately the Versa 2 does score your sleep quality, and it makes the process of sleep tracking a lot more seamless than most other activity trackers.

Long story short, both watches give you access to advanced sleep tracking, but only the Versa 2 packages this data into an overarching metric called Sleep Score.

Features Unique To the Vivoactive 4

Much Better Suited to Runners - Vivoactive 4

There are 4 main reasons which explain why the Vivoactive 4 is better suited to runners. Here they are.

Much better suited to Cyclists - Vivoactive 4

Once again, the impact of the Vivoactive 4’s built-in GPS makes the process of tracking cycles much more convenient. But there is also another key reason the Vivoactive 4 is better for cycling.

In short, the Vivoactive 4 supports ANT+ connectivity. This is important, because there are a bunch of cycling computers and other cycling accessories which rely on ANT+ technology to communicate with your watch in real time.

Admittedly there are are some heart rate belts and cycling computers which support Bluetooth and ANT+, but there are also a lot that don’t. Basically, you don’t have to worry about connecting with 3rd party cycling accessories if you choose the Vivoactive 4. The same cannot be said for the Fitbit Versa 2.

We’ve already mentioned that the Vivoactive 4 is better for runners and cyclists, but the list doesn’t end there. The following sports modes are either exclusive to the Vivoactive 4, or simply much better than the Fitbit equivalent.

Indoor Rowing & Outdoor Rowing – Neither of these exercise modes is available on the Fitbit Versa 2. It’s one of the chief complaints on Fitbit’s forums. Fortunately, these are standard modes on the Vivoactive 4.

Skiing & Snowboarding – Snow sports are basically ignored by the Versa 2, but they are covered by the Vivoactive 4.

Golf Mode – I know Fitbit lists Golf as an option on the Versa 2, but it really doesn’t make the grade. It relies on your phone’s GPS and a 3rd party app to work, and a lot of users find it difficult to activate properly. On the other hand, the Vivoactive’s golf built-in golf mode is excellent from the get go, and Garmin gives you access to the biggest range of golf course maps.

The concept is actually fairly simple. Your body is the battery, and the Vivoactive 4 measure’s how ‘charged’ you are. The accuracy of Garmin’s body battery score might not be perfect, but it’s good enought for most people and it’s a nice way to keep tabs on your health, fitness and energy levels.

If it’s the weight-loss game that you care most about and you do most of your training at the gym, the Fitbit Versa 2 is a really good option. It’s significantly cheaper than the Vivoactive 4 and it performs just as well as an outright activity tracker.

However, if you want a watch that can track a bunch of different sports, without the need for your phone, while still functioning exceptionally well as an activity tracker, the Vivoactive 4 is definitely the better option.

You might have to pay a bit for all the extra features, but if you’re a passionate sports person, it couldn’t be more clear that you will be better served by the Vivoactive 4.