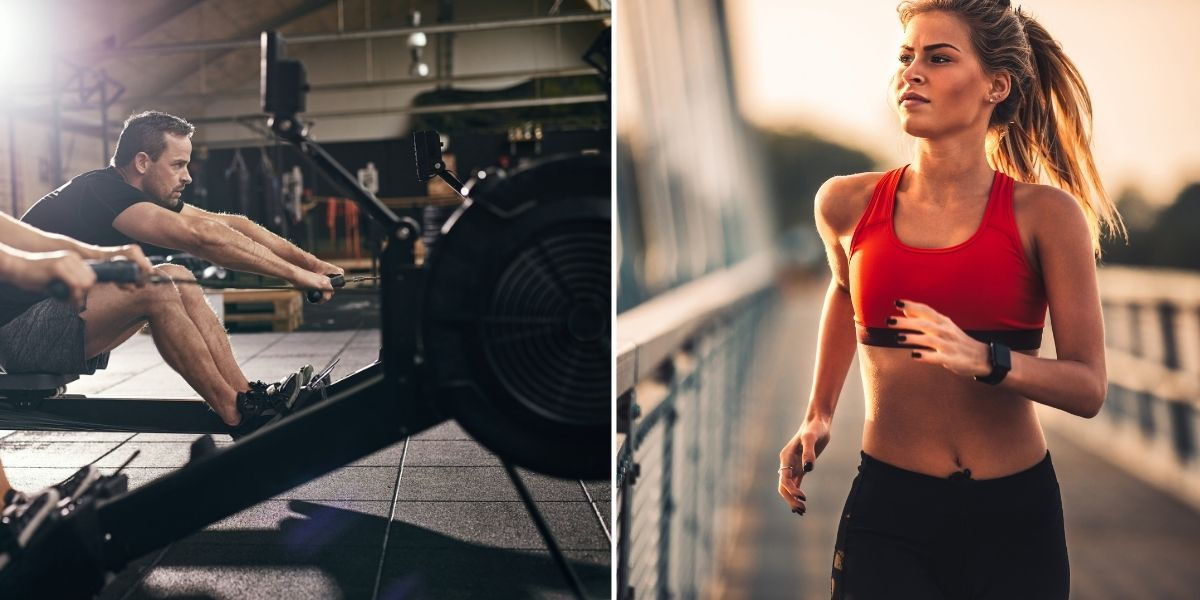 Despite these two big wins for running, rowing can be better for improving your VO2 Max, and you are far less likely to get injured when using a rowing machine.

Now let’s take a closer look at Running vs Rowing for Weight Loss.

Why Running Is Better Than Rowing For Fat Loss

While it is entirely possible to burn more calories by rowing or running at high intensity, the point is that it even moderately intense running can burn nearly 1000 calories in an hour. This places it at the very top of the calories per hour pyramid for cardiovascular exercise.

2. It’s easier to run for long periods of time

Even though you can achieve a respectable ‘calories per hour’ number when rowing, most people will find it very difficult to actually row for 60 minutes. In fact, you would be hard-pressed to find someone at your local gym that is willing to row for more than 30 minutes in total during a gym session.

This stands in stark contrast to running, a sport in which it is common to exercise for 60 minutes or more, without taking a single break. You need only look at the average marathon time (4 hours 21 minutes for men), to realize that the human body is literally primed to run for longer periods of time.

This is important in this discussion because the total time spent exercising will have a massive impact on how many calories you burn during a single training session, and how much fat you can expect to lose over weeks and months of training.

3. Running Is Much More Affordable

Of all the forms of cardio, running is easily one of the cheapest.

All you need is a decent pair of shoes to get started. You can use free GPS apps on your phone to measure how far you are running and how many calories you are burning.

The same cannot be said for rowing, which either requires a gym membership or a decent rowing machine. In other words, with rowing, you have a choice of a monthly membership fee or a substantial lump sum payment to purchase a rowing machine outright. This is not to say that rowing isn’t worth it. The point is merely to demonstrate that running is an extremely affordable sport.

4. Races & Events Can Be Hugely Motivational

It is extremely common for athletes to increase the intensity of their training in the build-up to an event. Races and events act like huge motivational triggers that can push you through tough training sessions and increase your fitness levels in the process.

Furthermore, it is very easy and very affordable to enter running races. For instance, Parkrun happens all over the world, offering people the opportunity to enter a timed 5K running event, entirely for free. Once you’ve got a few 5k races under your belt, you can move on to more challenging distances like 10k’s, half-marathons and even full marathons.

The point is, once you start entering events, you can count on an automatic uptick in the frequency and intensity of your training efforts.

5. You Can Join A Supportive Community

Another major benefit of running over rowing is that you can easily access a large number of communities. This includes running clubs, forums like MyFitnessPal, and even social media communities on platforms like Strava.
Integrating yourself into a running community can make running more fun, more social and more motivating for many people.

Rowing simply doesn’t offer the same kind of opportunities for community integration. It is more of a solo sport that is confined to the ergo machine at your local gym.

Why Rowing Is Better Than Running For Fat Loss

1. You Are Far Less Likely To Get Injured

Once you start road running, you may be surprised by how easy it is to get injured. For instance, Yale Medicine points out that 50% of all runners will experience an injury during the year. That literally means you have a 1/2 chance of getting injured if you run regularly over the course of the year.

Conversely, the likelihood of getting injured while rowing is significantly lower.
This is partly because it is harder to row for extended periods of time, which automatically reduces the likelihood of an overuse injury (the most common running injury).

The only slight risk that you can run into with rowing is lower back strain if you row vigorously or with poor form. However, if you take frequent breaks and focus on good form, the likelihood of a serious injury is very low. With running, you could put yourself out for weeks (and sometimes months) if you tear a muscle unexpectedly. It happens all the time.

2. It Targets Your Upper Body & Your Lower Body

Even though running is excellent for burning calories, most of the muscle-building benefits fall into the lower half of your body.

With rowing, there is a very good split between your lower body and your upper body during each and every stroke.

As a result, if you commit to rowing consistently, you should see far more impressive muscle-building benefits in your upper body. In particular, your biceps, deltoids, lats, and lower back should see an increase in size and strength over time.

Getting rid of lower abdominal fat can be a tough ask, even for some of the most athletic people on the planet.
Moreover, this particular area of the body is a common fat collection area for men in particular (especially if they like drinking beer).

In a way, every single stroke that you perform on a rowing machine is like full-body calorie-burning exertion which includes a reverse lower ab crunch in the process.

In other words, you are burning calories and exercising your lower abs simultaneously. Running isn’t quite as good for targeting your abs.

4. Rowing Is A Good Option For People That Don’t Like Running

There are plenty of people out there that simply don’t like running. Most of these people tend to be overweight and unfit, but even plenty of well-built gymgoers avoid running at all costs.

If you fall into the ‘non-runner’ category, rowing offers an excellent alternative that can help increase your cardio-vascular fitness without interrupting your strength training regime.

It should be pretty clear that running actually trumps rowing in terms of calorie-burning potential. You should be able to burn calories faster and spend a longer time exercising collecting kilometers on the road or the treadmill.

Based on this, running offers a more efficient method for creating a calorific deficit, which is a fundamental necessity for fat loss.

Is rowing or running better for weight loss?

How long must you spend on a rowing machine to lose weight?

Ideally, you should be aiming to burn 500 calories or more during an exercise session in order to lose weight.
In order to hit this number on a rowing machine, you should aim for about 45 minutes of rowing in total.

Rowing vs Running for Cardio

Said another way, rowing can be slightly better for improving the ability of your lungs to use oxygen for energy.
That being said, running is better for achieving your maximum heart rate (HR Max).

Ultimately, running and rowing are both extremely efficient forms of cardio for increasing cardiovascular fitness. You can’t go wrong with either option, and they can actually complement one another quite nicely if you have access to a rowing machine.