I’m gonna start by stating the obvious. Getting injured SUCKS!
There’s nothing worse than getting into a solid training groove, only to have all your hard work dismantled by an injury.
Just so you know you aren’t alone, here’s a quick personal revelation. Over a two year period from October 2016 to November 2018, I experienced no less than 7 separate calf strains.
Every time one of my calves healed, the other one would surprise me with a completely fresh tear. At one stage, I started to wonder if the universe was telling me to take a 2 week break, and then retire permanently from my running.
But I’m a stubborn dude. Not only did I find a way to overcome persistent calf strains, I also managed to maintain my cardiovascular fitness during these awful periods on the sidelines.
In this post, I’m going to reveal what I consider to be the 3 best alternatives to running when you’re injured.
Side note – All of the cardio methods below share one thing in common. They exert very little impact force on your legs. This is crucial, because the last thing you want to do is make your injury worse!
Fortunately, you can  go all-in with the exercises below, without worrying too much about doing further damage.

Before we even begin to explain the benefits of rowing, here’s a picture of Gerard Butler in peak condition during his role in the movie 300.

Now you might be wondering why I’ve included this picture. The short answer is that Butler credits rowing as being the form of exercise that ultimately allowed him to get more cut than he has ever been.
In the video below just skip to the 1:30 mark if you want to hear Butler saying these exact words.

So why is rowing so effective?

Full body exercise
There are very few exercises that target as many muscles in your body as rowing. It literally covers the full length of your muscular skeletal system.
Perceived Difficulty Is Just As High As Running
In fact, I would say that most runners find rowing more difficult than running. I know I fall into this camp.
This is important for two reasons.
1) You can push yourself just as hard as you would on the road.
2) You can maintain your mental strength and fitness. I think people underestimate how important the mental grind is. Persistently overcoming that nagging voice begging you to stop is a skill that every runner needs to work on consistently. With rowing, you can tap into the same reservoirs of mental strength that you would on a challenging run.
You Burn a Ton of Calories
Running and rowing are comparable in terms of how many calories you can burn during a training session. The bullet points below make it pretty clear.
Rowing Takes the Pressure and impact off your legs
Of course you have to use your legs to row efficiently, but the point is, you won’t be straining your leg muscles during a typical rowing session. There is basically no ‘impact force’ exerted on your legs. This is a massive win for injured runners, because you can still test your limits, without worrying about worsening your injury.
You can row at a similar speed and cover a similar distance
Strangely enough, running and rowing are comparable in terms of the speed that you can run/row, and the distance that you can run/row. For instance, I often train at about 4 mins/km when running. On the rowing machine, I tend to row at about 4 mins/km as well.
With that being said, I find it much harder to sustain that speed on a rowing machine than on a treadmill. Usually, I’ll take a break between each km covered, sometimes every two km if I’m feeling super fit. With running, it’s much easier to cover larger distances without the need for breaks.
So again, you could argue that running is actually easier than rowing, especially for runners who tend to skip this form of cardio altogether.

Ultimately, rowing might just be the best alternative running when you’re injured. You will burn a crazy amount of calories, your heart rate will go through the roof, and you can push yourself even harder than you would on a typical run.

Swimming is arguably the most therapeutic exercise available to mankind. It takes all of the harsh impact forces that plague terrestrial (land-based) sports, and eliminates them completely.
When you get into the pool, you’re basically engaging in a form of physical rehabilitation, whether you acknowledge it or not. More importantly, swimming can help you maintain your cardiovascular fitness during your time on the sidelines. Swimming also opens up the following benefits.
No impact on your legs – This is vital, because most runners experience leg-related injuries. When you start swimming, you are essentially changing your relationship with gravity (due to the friction of the water) and removing all forms of physical contact that could exacerbate your injury.

Good calorie burning potential – Swimming might not be quite as effective as running, but it’s still an excellent way to burn calories. The bullet points below reveal how many calories you can expect to burn when swimming for 60 minutes.

Side note – The only drawback to the fast freestyle stat above is that most people won’t be able to swim non-stop for 60 minutes. In other words, the stats above don’t account for rest breaks.
To further emphasize just how many calories you can burn when swimming, here’s a picture of Michael Phelps. 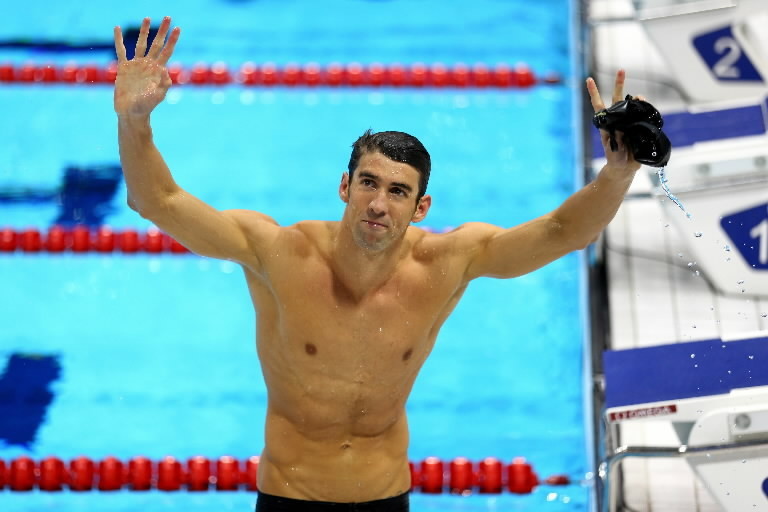 What makes this picture interesting is that Phelps was consuming between 8 000 – 10 000 calories during the peaks of his training. He had to consume obscene amounts of food, because his body was going into calorie burning overdrive every time he stepped into the pool.
Obviously most people won’t burn nearly as many calories as Michael Phelps when they jump in the pool. The underlying point here is that you can burn hundreds of calories during a swimming session. This can help you maintain your weight during your time off.
Great for upper body strength
Unlike long distance runners and cyclists, swimmers tend to have well built upper bodies. This is mainly because swimming (in particular freestyle and butterfly) makes you stronger. Unlike running, where your legs do most of the work, your arms and shoulders are the true engines here.
Swimmers tend to have higher lung capacities
By adding regular swimming to your schedule, you can potentially increase your lung capacity. This can be an advantage when performing any form of cardio, running included.
You can improve your V02 Max with the right kind of training
More good news. With the right kind of swimming training, you can actually improve your V02 max. This training program has more info on how to do this.
The point is, consistent high intensity swimming will improve your body’s ability to utilize oxygen as an energy source. For an injured runner, that’s what dreams are made of.

Last but not least is the wonderful sport of cycling.
Very Low Impact
Like rowing and swimming, cycling is also a low impact form of cardiovascular exercise. This makes it an excellent choice for injured runners that need to avoid doing further damage.
Brilliant for building leg strength
Of the three alternatives mentioned in this article, cycling is definitely the best for building leg strength. It’s probably not necessary, but here’s a picture of Mark Cavendish’s quadriceps.

You can burn loads of calories
While cycling might not burn as many calories as running, it’s still a great form of cardio with high calorie burning potential. The bullet points below show the difference between running and cycling in terms of burning calories.

You can do it indoors or outdoors
Most gyms are setup with stationary bikes, and you can also invest in a indoor cycle trainer, to help simulate outdoor cycling in the comfort of your own home.

It’s pretty fun
There are few people on this planet who don’t experience a small amount of joy when riding a bike. You basically get a double shot of dopamine when you hop onto the saddle.
The first dopamine shot comes from the sheer joy of cycling. The second dopamine shot gets released when you push yourself hard during a training session.
It can become a core component of your regular training schedule
A lot of runners have a tendency to run themselves into the ground, quite literally.  It’s actually insane how frequently normal runners get injured.

On runnersconnect, coach Jeff Gaudette points out that “79% of runners get injured at least once during the year.”  The good news is that frequent cycling can help you avoid this fate.

By replacing one of your standard running sessions with a low impact, strength-building cycling session, you can reduce the likelihood of injury and improve your training consistency in the long term.

Even though it’s super frustrating when you experience a running injury, there are ways to mitigate the damage and bounce back stronger than you were before.

The 3 methods outlined in this article can help you maintain your endurance fitness (and stay sane) during this challenging time in your life.

The best thing you can do at this point is to pick 1 of the 3 methods outlined above, and treat it with as much passion as your running career.

By keeping your fitness levels high, and giving yourself adequate time to recover from your injury, your transition back to the road will be so much smoother in the long run.