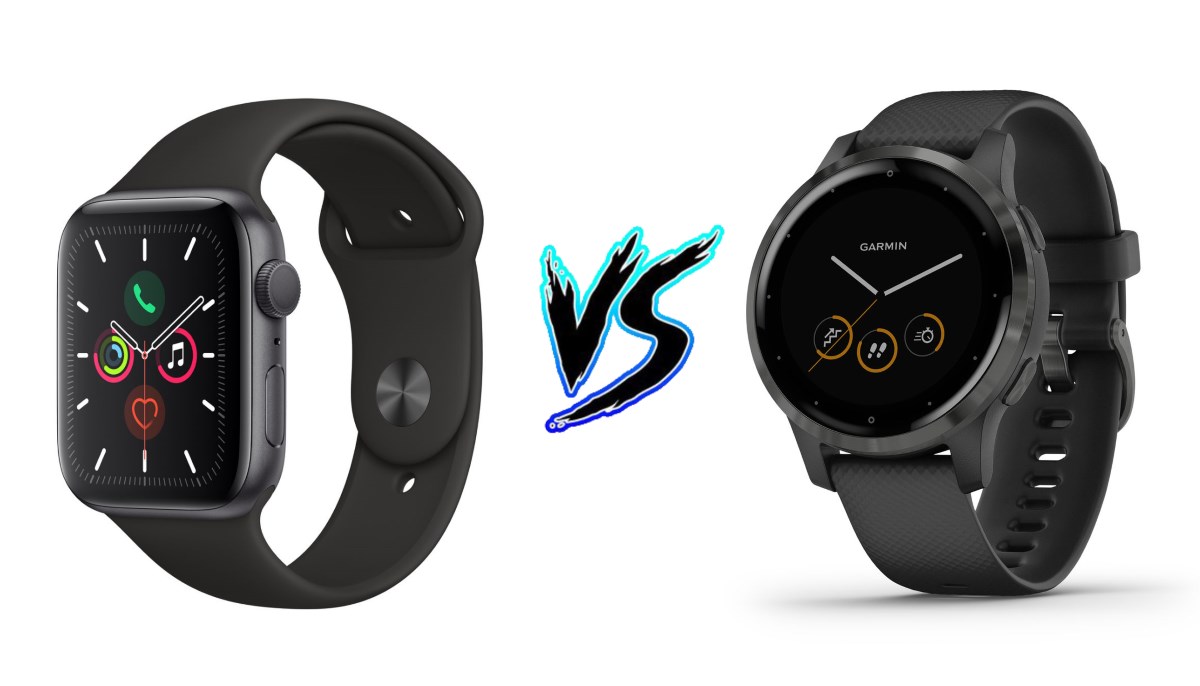 Garmin Vivoactive 4 – Quick Summary: The Garmin Vivoactive 4 is one of the most well-rounded GPS Smartwatches that has ever been made. It’s packed with sports modes, it performs really well as an activity tracker, and it includes all Garmin’s latest innovations such as Body Battery Score, on-screen workouts, a pulse oximeter and even under water heart rate measurements.

Now that you have a basic understanding of what these GPS watches are all about, we can dive into all the main differences, using a collection of comparison tables and simple explanations.

What are the main differences between the Vivoactive 4 and the Apple Watch 5?

Reasons To Choose The Apple Watch 5

It's a better Smartwatch (for iPhone Users)

As a Smartwatch, the Apple Series 5 is basically untouchable.

The screen resolution is excellent, the operating system is awesome, it responds beautifully to touch – all classic hallmarks of a wearable Apple device.

In addition to this, the sheer variety of apps that you can choose from is outrageous. These apps go above and beyond fitness apps, which adds a huge amount of everyday value when you aren’t training.

All in all, you really can’t go wrong with the Apple Watch 5 if you just want an excellent smartwatch that also has decent sports and fitness tracker features.

The Screen Is Significantly Better

The screen of the Apple Watch Series 5 is absolutely beautiful. You can expect vivid color, a strong backlight, and great touch interaction. The gulf between the watches is also pretty clear when you do an apples to apples comparison of the screen resolution:

This is not to say that there’s anything wrong with screen of the Vivoactive 4. It just can’t quite compete with the Apple Watch 5 in terms pixel density, brightness or color quality.

The Operating System Is Better

Unlike the Vivoactive 4, the Apple Watch 5 is designed to do a lot more than just measure you sports and activities.

In reality, it’s much closer to an iPhone that you just happen to wear on your wrist. It really is just a seamless extension of Apple’s mobile operating system which has been the industry leader for decades.

Even though the Vivoactive 4 supports a larger number of sports modes (natively), only the Apple Watch 5 can track open water swimming. The bullets points below make the difference in swimming modes crystal clear:

There Is A Cellular (LTE) Version

The Apple Watch 5 includes a cellular version, which basically means you can make calls and connect to mobile data service providers directly from the watch.

Interesting, Garmin actually dabbled in this space with a special version of the Vivoactive 3 Music. However, LTE connectivity doesn’t appear to be one of Garmin’s strategies for the foreseeable future, so if this is important to you ,the Apple Watch 5 might be a better fit.

There are 2 main reasons that Apple Pay Beats Garmin Pay.

Perhaps more importantly, the selection of apps isn’t limited to health and fitness. In essence, you can download calendar apps, screen-saver apps, to-do list apps and so much more. It really is like running the iPhone on your wrist.

Reasons To Choose The Garmin Vivoactive 4

It's better for marathon runners

It doesn’t matter which generation of Apple Watch is up for discussion. Each and every version has been stifled with a relatively short battery life (when compared with  competing GPS sports watches).

While the Apple Watch 5 is a step in the right direction, it really isn’t the best option for people who take marathon running seriously, precisely because of the average battery life. For instance, if you were to do an ultra maraton, there’s a chance the Apple Watch 5 might not make it through the full race.

On the other hand, the Vivoactive 4 will keep going for up to 18 hours in GPS mode, which is more than enough for even the toughest ultra marathons.

In addition to this, the Vivoactive 4 also gives you access to Garmin running coach. This basically means personalized training plans for 5k’s, 10k’s and 21k’s, built by some of the most highly respected running coaches in the business.

It's better for cyclists

There are 2 main reasons the Vivoactive 4 is better for cyclists.

(1) It supports ANT+ connectivity: This basically means that you can connect to a bunch of different cycling accessories like chest straps and cycling computers, using ANT+ to communicate between the accessory and the Vivoactive 4.

You can’t do this with the Apple Watch 5, because it doesn’t offer ANT+ support.

(2) GPS Battery Life: Admittedly most people are unlikely to spend more than 6 hours in the saddle (during training or race days), but still. The convenience of the Vivoactive’s extended battery life means that you can fit in several training sessions over multiple days before you have to recharge the watch.

With the Apple series 5, you might need to keep if a mini powerbank in your cycling shorts if you haven’t planned your recharges carefully (apologies in advance to Apple fan boys).

It Actually Has Sleep Tracking

Imagine if Steve Jobs was still alive and he was challenged by Elon Musk to create a device that can make it through 24 hours on a single charge. Only in that particular reality would the possibility of native sleep tracking on the Apple Watch actually exist.

For now, you will have to go for the Vivoactive 4 if you want advanced sleep tracking metrics.

Garmin’s body battery score is a pretty cool concept. It basically combines your sleep data, resting heart rate and training data into a collective metric called your ‘Body Battery Score’. You can then use this score as a guideline for getting enough rest, or dialing it back a notch when things are clearly out of kilter with your body.

It has a Pulse Oximeter & Stress Tracking

The pulse oximeter is used to measure your blood oxygenation levels. This is particularly useful if you’re training at altitude, or hiking through seriously challenging vertical terrain. 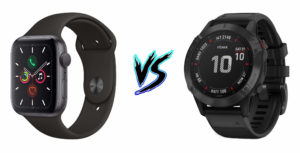 Does Apple Pay Have A Spend Limit?